Free play Netball on the Multi Use Games Area

Bands in the Park- Waterbeach Brass 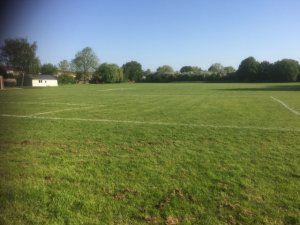 Little Paxton Parish Council owns and maintains the QEII Playing Field which
is situated off the High Street on the road leading up to the Village Hall.

The Field received QEII status in 2012 as part of the Queen's Golden Jubilee Celebrations.

There are many attractions on the field including a cricket wicket, 2 football pitches, flood lit multi use games area, netball facilties, basketball/football arena, 3 youth shelters, 28 items of outdoor gym equipment and a petanque pitch (french boule).

The children's play park is next to QEII Playing Field and has a range of equipment for
all ages - from toddlers up to the age of 12.

Casual Vacancy for a Parish Councillor

If you've got a few hours to spare- and an interest in the future of the village- we'd like to hear from you.

Today is the start of the Keep Britain Tidy Love Parks National Campaign.
The QEII playing field & children's play park is a much loved village open space.
A great place to relax and spend time during the school Summer holidays. #LoveParks #RespectParks #ProtectParks

The Little Paxton Dinosaurs are racing to the village hall to see the St. Neots Museum dinosaurs at Paxfest.
Have you got your wrist bands yet? The dinosaurs have got theirs.
Paxfest & Fun Dog Show Sat 10th July QEII Playing Field, Little Paxton.
#stneotsmuseum #littlepaxton

St. Neots Museum will be providing children's craft activities in the village hall at Paxfest.
The museum dinosaurs are very excited and can't wait to get to Paxfest.
Dinosaurs will be on sale.
#paxfest #thingstodo #stneotsmuseum #stneots
Paxfest & Fun Dog Show Sat 10th July